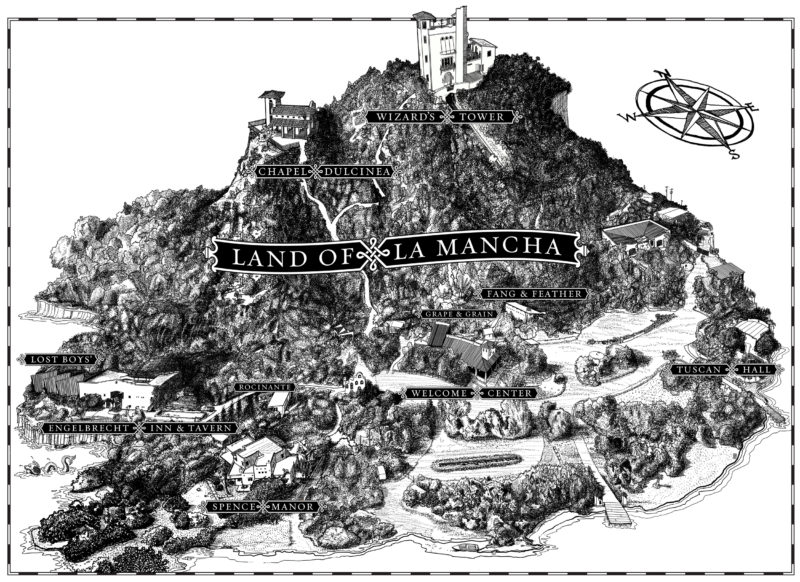 The Land of La Mancha is southwest of Austin, off Farm to Market Road 1826. The village of La Mancha, which lies at the base of First Mountain, is most known for the famous Chapel Dulcinea, where thousands are wed each year. La Mancha is a sleepy and serene village until a wedding party arrives, bringing with them an explosion of music, merriment, and matrimony. The parties go on into the night. And if the blessings of Our Lady Dulcinea aren’t enough for you, the Whiskey Tribe at the Fang & Feather offers a selection of their own elixirs, highly prized for their potency.

The Camino Dulcinea leads from La Mancha to the chapel, roughly two hundred yards north. Beyond the chapel civilization ends; the trail is well over a thousand years old and remains in its natural state. There are no lights on this trail, which makes it the best spot for star gazing in all of La Mancha.

The Wizard’s tower, where select students come to study arcane wisdom, sits on the highest point in La Mancha but does not dominate the landscape. If anything the Tower is more mysterious and hidden than the chapel. You make a turn on a path and suddenly the tower appears before you. Take another turn and it is nowhere to be seen.

I suppose that sort of thing is to be expected with wizard towers.

The gateway at the Bells of La Mancha will lead you down Gallagher Lane, past Rocinante into the Valley of Dulcinea, to Engelbrecht Inn & Tavern, and to the Western Wild Lands beyond. There are many strange things to the west of Engelbrecht. I have found painted rocks, a shrine containing the bones of dead animals, and the remains of an old road running east and west that goes nowhere regardless of which direction you choose. The famous Pissing Stone of La Mancha is also out there.

La Mancha is where I live, explore, and write in this new season of my life.

Our map is the work of Paul Soupiset, who has captured the soul of La Mancha in a beautiful way.

If you click on the map you’ll find an enlarged view that you can explore. Click a second time for the zoom.