Gully of the Wild Things 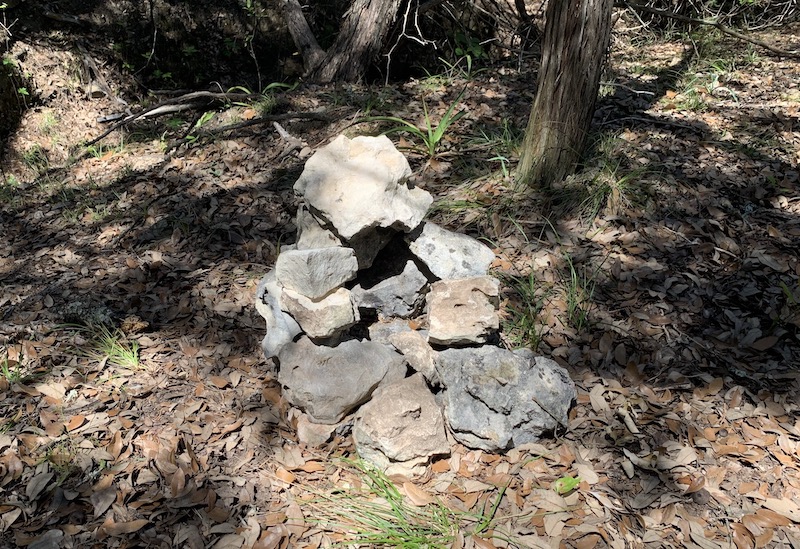 Beyond Engelbrecht Inn & Tavern and the Lost Boys is a crude trail leading westward toward the Gully of the Wild Things. There are some painted rocks along the trail. I don’t know who painted them or what purpose they once served, but they are guide stones now. If you come across a collection of animal bones on a crude shelf wedged in the branches of a tree you are getting close.

Do not underestimate how wild this part of the property is. Wear boots and long pants.

The gulley falls away from Crystal Hills Drive and drops sharply along the western border of the property. It then turns and becomes the creek at the bottom of the Valley of Dulcinea.

The vegetation along the gulley is dense and mostly impenetrable. There are a few spots where you can get through if you don’t mind stooping and pulling branches out of the way. In the sand at the bottom of the gulley I found a large pine cone sitting upright as neatly as if someone had placed it there.

I picked it up, stared at it, and then raised my eyes to the canopy of trees above. There are no pine trees here or anywhere on the property that I’ve seen.

I did what any reasonable person would do. I built a shrine of stones and placed the pine cone inside so other pilgrims might find it and also contemplate the mystery of its existence.

It seemed the thing to do at the time.

I dropped by for a visit a couple of weeks later. The shrine was there but the pine cone was gone. Which makes it truly a shrine now, as it commemorates a minor mystery.

“On this spot was found by Gordon Atkinson a pine cone not native to this area. Two weeks later it was spirited away by forces unknown and for reasons equally unknown.”

I did say it was a minor mystery.

And such minor mysteries abound in the Valley of Dulcinea. Strange noises erupt at odd hours. There are creaks and buzzes and rattles and clattering, scraping noises. Human voices surf the escarpments and emerge with stunning clarity hundreds of yards away. On a nearby hill, privately owned, is a site sacred to the people who were here before us.

The Celts spoke of thin places, places where the veil between worlds is more permeable. I think the Academy exists on one of these thin places.

I always get the feeling something bigger than me is here.