Seymour and Harvey: an elegy for wild animal friends 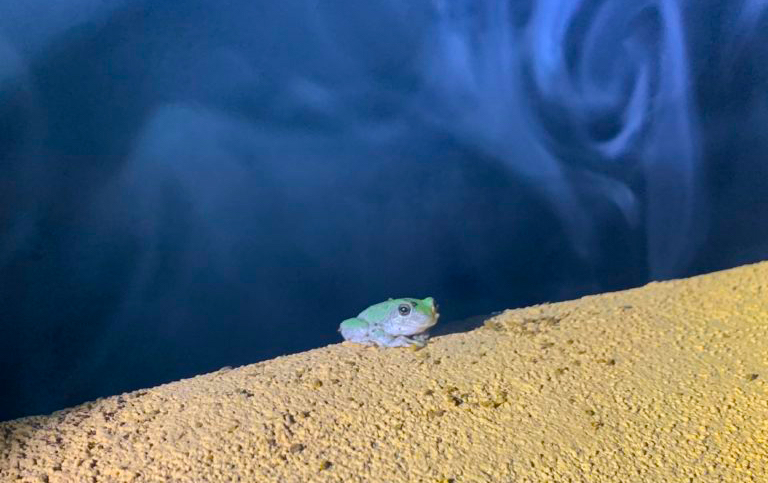 Seymour was a small green frog who used to appear on the second floor balcony of Spence Manor, where I lived before I moved into the Hermitage. I was surprised the first time I saw him, but apparently frogs are better climbers than you might think. I kept cigars on the balcony back then, and whenever I saw Seymour I would light one and puff on it while I spoke to him.

The relationship was one-sided, of course. Seymour seemed as unmoved by my sparkling conversation as he was by the smoke I blew his way, hoping to stir some sign of life in him. In the entire time I knew Seymour, he never blinked. Not once.

And I was looking. Because I was thinking, surely a frog has to blink SOMETIME, right?

Apparently not. I observed no blinking during my “Cigars with Seymour” period, which lasted until he stopped showing up. A few weeks went by, then a couple of months. Eventually I gave up and brought my cigars back inside. I never saw him again, nor have I seen any other frogs around here. There are plenty at Tuscan Pond in East La Mancha, but Seymour is the only frog I’ve seen on our side of the mountain.

I think Seymour was an aberration, a frog who went out exploring and lost his way. Or maybe he was a gift from the Universe to a lonely man for whom a moment of levity with a frog might make the difference between a lonely night and a REALLY lonely night. I don’t know how to explain my relationship with Seymour, but it was sad bringing those cigars back inside, and I used to wonder what became of him. 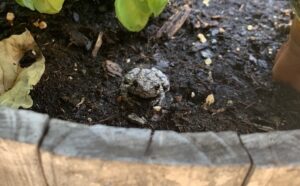 And then I met Harvey.

Harvey was a toad who lived in the shade of a potted plant on my porch. At night he hunted on the sidewalk near the lights. I was delighted to find him living in my plant and kept it generously watered for him during the heat of July. Whenever I saw Harvey out hunting I greeted him.

Harvey lasted about a month before disappearing the same way Seymour did. One day he was here, and then he was gone. After Harvey I knew the truth. When wild animals leave, they don’t come back. The amount of time you get with a wild animal is usually in proportion to its size. A fox or a bird might be around for a year or more. If you make friends with a moth, you’re going to get a few days at most.

There have been numerous wild animals I have known here in La Mancha, each with its own story. There was Jeremy the lizard, Eric the bee, and Bixby the jumping spider. I don’t give them all names. There was a moth, a tiny spider in my shower, a roadrunner, a tarantula, and a mockingbird, among others. Each of these existed for a brief time within the world of my awareness. Each brought me some measure of happiness, for I like watching animals. But the World is cruel and changes quickly. It rains or it freezes or someone moves a potted plant from one place to another. Every change we bring to the world means the death of countless small creatures who come and go in storms of fragile fecundity. Their lives are brief and mysterious. What do they think? What do they feel? How much depth can they appreciate about the world with such brief and tenuous lives?

Then again, the same questions could be asked about me. Perhaps that is why I am driven to write about my life.

I want someone to know what I thought, what I felt, and the depths of meaning I perceived and knew during my own brief and tenuous existence here in La Mancha.