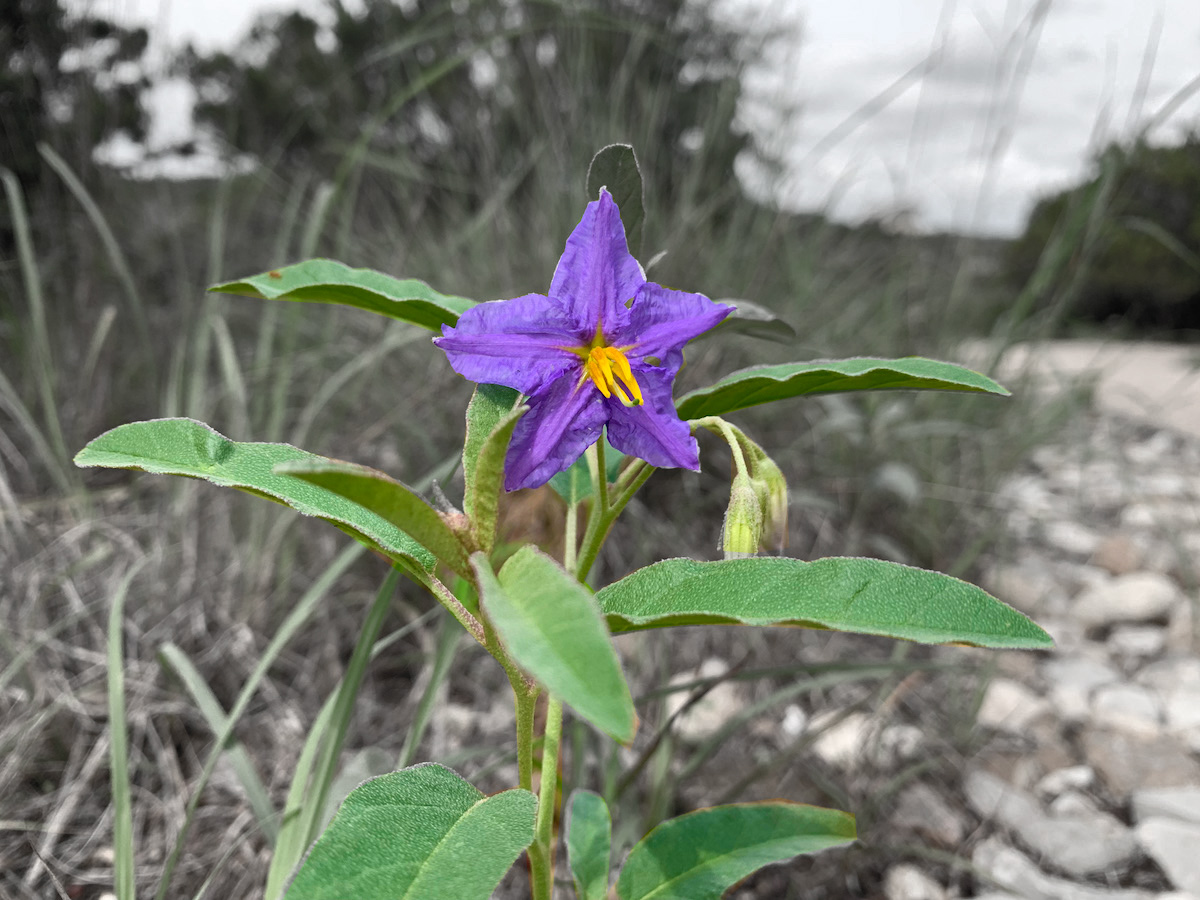 Nobody trusts September in Texas. We know Summer hasn’t given up yet. 100 degree days in September are not uncommon around here. But still, Fall is coming. She might not get here until October, but Summer’s days are definitely numbered. You can see the relief in people’s faces as they emerge from their air conditioned caves and stand, blinking, in the sunlight. 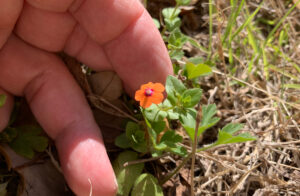 By September, the land has had the hell beaten out of it, and it shows. The evergreen Juniper, with her deep roots, looks as good in September as she did in March. But native grasses, shrubbery, and flowers have dried up, died, or gone dormant. I saw my last Puellae Chorum in June off the back porch of Spence Manor. By July the flowers were pretty much gone around here. The store-bought flowers that Roxi and Joe tend are still blooming, of course. They’ve even got live roses over by the chapel. But I prefer the wildflowers. And they were all dead and gone by July.

Or so I thought. 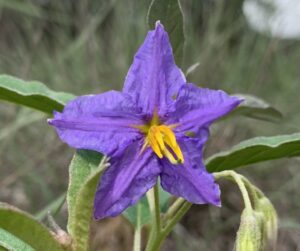 I was on the East & West Trail that runs behind the Village of La Mancha, right where the road turns north to the Wizard’s Tower. I saw a flash of bright, luscious color. It was a wildflower. In full bloom. And not just any flower. A purple and yellow one, which are common in April and May, but don’t typically make it through the Summers. This flower was not tucked safely up under a tree in the shade. It was right by the path in full sunlight. And it was as fresh and young and lovely as flowers in Spring.

She is a variety of Nightshade, very poisonous, which might explain how she has survived. The animals around here know she’s not safe and leave her alone. Somehow, after the brutal July and August we endured, she found energy within herself and erupted in color while all around her lay dying. And her beauty is more compelling when set against the withered and burned landscape she somehow thrives in.

Beauty and danger walk hand-in-hand, I’ve noticed. The most deadly plants and animals are often arrayed in splashes of luxuriant color which serve as a warning. Nature uses thorns and poisons to protect her most beautiful creatures. When humans get involved, the barbs turn sinister. At the feet of Beauty you will always find her dark minions: Jealousy, Desire, Pride, and Power, among others.

Have you ever looked at something beautiful long enough to feel the shadows rising in your soul?

When I experience Beauty in any of Her forms, the first feeling within me is the holiest and highest. I feel joy to have seen this beautiful thing and joy to know that such a thing exists in our world. As the joy fades, I will inevitably begin to covet the thing. It begins innocently with me considering what I must do to ensure that I can see this thing again in the future. It begins there. It ends with me compulsively trying to capture the perfect photograph and not really seeing the beautiful thing anymore.

Sometimes where you end up with Beauty is a long way from joy. 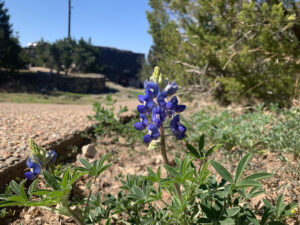 I saw my first wildflower in March on Gallagher Lane. It was a Bluebonnet, which are also poisonous. And now Nightshade ends the flowering season with her display of deadly beauty. This place. La Mancha. It is beautiful and tragic, artistic and gaudy, wise and silly, rowdy and quiet as death. There is much beauty here. The land itself, rising from the Valley to the Tower. The weddings, the whiskey, and the Wizard. These things attract crowds of hopeful or desperate people wanting to learn, or to celebrate, or to intoxicate, and in many cases all three at once.

La Mancha. She is beautiful.

And She is deadly.