It all began for me at Spence Manor 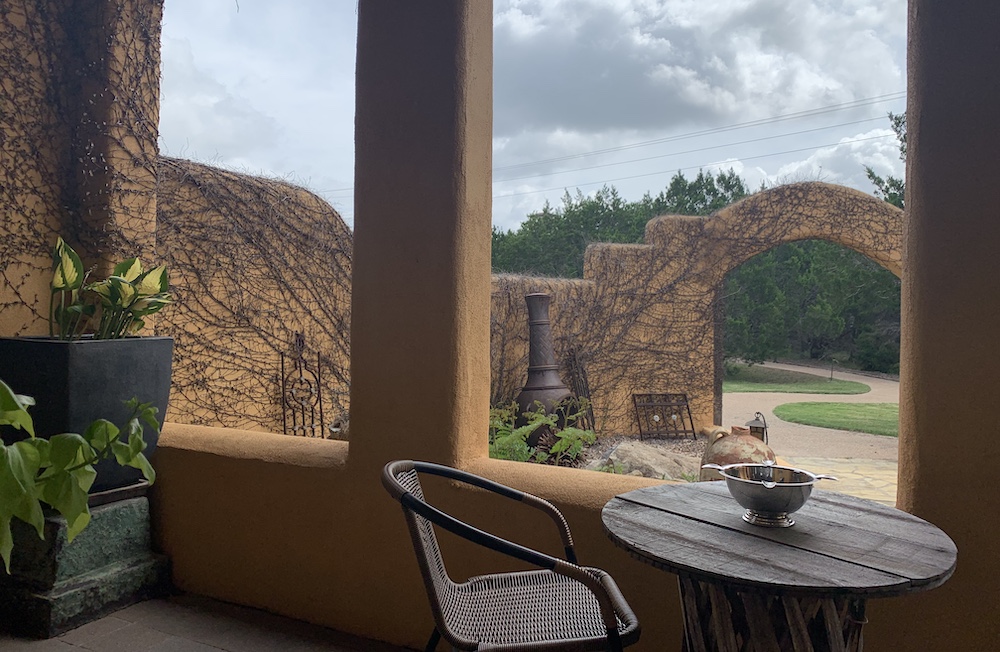 The front porch of Spence Manor, where I currently reside, has an oddity about it. If you are the right sort of person and standing in just the right spot, a kind of foreshortening illusion sometimes occurs. Look through the adobe pillars and quietly watch the wall and archway just a few feet beyond the porch. If you are patient and maybe a little lucky, the wall and arch will push away from you into the distance and be transformed into the large, fortified gate of an old Spanish town.

Through that gate the pathway winds and disappears behind a wall of dark juniper.

Our blessed Lady Dulcinea granted me this beatific vision and assured me that others may see something similar. I hope you also receive this vision, pilgrim, for the Land of La Mancha came alive and opened herself to me as if I had walked through a portal into another world.

Past the junipers, the pathway reaches a dead end. A left turn will lead you down Gallagher Lane into the Valley of Dulcinea, to the Engelbrecht Inn & Tavern, and to the Western Wild Lands beyond. There are many strange things to the west of Engelbrecht. I have found painted rocks, a shrine containing the bones of dead animals, and the remains of an old road running east and west that goes nowhere regardless of which direction you choose. Rumor has it that the famous Pissing Stone of La Mancha is somewhere out there. I have looked, but so far have not found it.

A right turn will take you through the Bells of La Mancha and into the Village of La Mancha, which is known for the famous Chapel Dulcinea. Dulcinea is greatly beloved by those in the village and those who live in the valley below. She is the patron saint of newlyweds and newly brokenhearteds.

La Mancha is a sleepy and serene village until a wedding party arrives, bringing with them an explosion of music, merriment, and matrimony. The parties go on into the night. And if the blessings of Our Lady aren’t enough for you, the Whiskey Tribe at the Fang & Feather offers a selection of their own elixers, highly prized for their potency.

Two hundred yards up the Camino de Dulcinea is the chapel itself. Civilization ends at the chapel. The trail beyond is well over a thousand years old and remains more or less in its natural form. There are no lights on this trail, which makes it the best spot for star gazing in all of La Mancha.

Another path takes you to the Wizard’s tower, where select students come to study arcane wisdom. The Tower sits on the highest point in La Mancha, but it does not dominate the landscape. If anything the Tower is more mysterious and hidden than the chapel. The path winds through the trees and suddenly the tower rises up before you, looking down on your small presence.

“Mortal, why have you come here?”

The Wizard asks many questions, but does not demand answers. If you are not ready, simply follow the path in another direction and the Tower will disappear from view completely. Your heart stops racing and you can be about your business.

That is the way of Wizards and their towers.

The Land of La Mancha is both where I live and what I am exploring in this season of my life.

I do not know what will become of me.

I do expect at some point to meet the Wizard.

*I don’t know if you are the sort of person who can see these kinds of visions, but I marked the spot on the porch with an X for you. In case you want to seek the vision yourself. I assume my mark will last as long as it needs to.