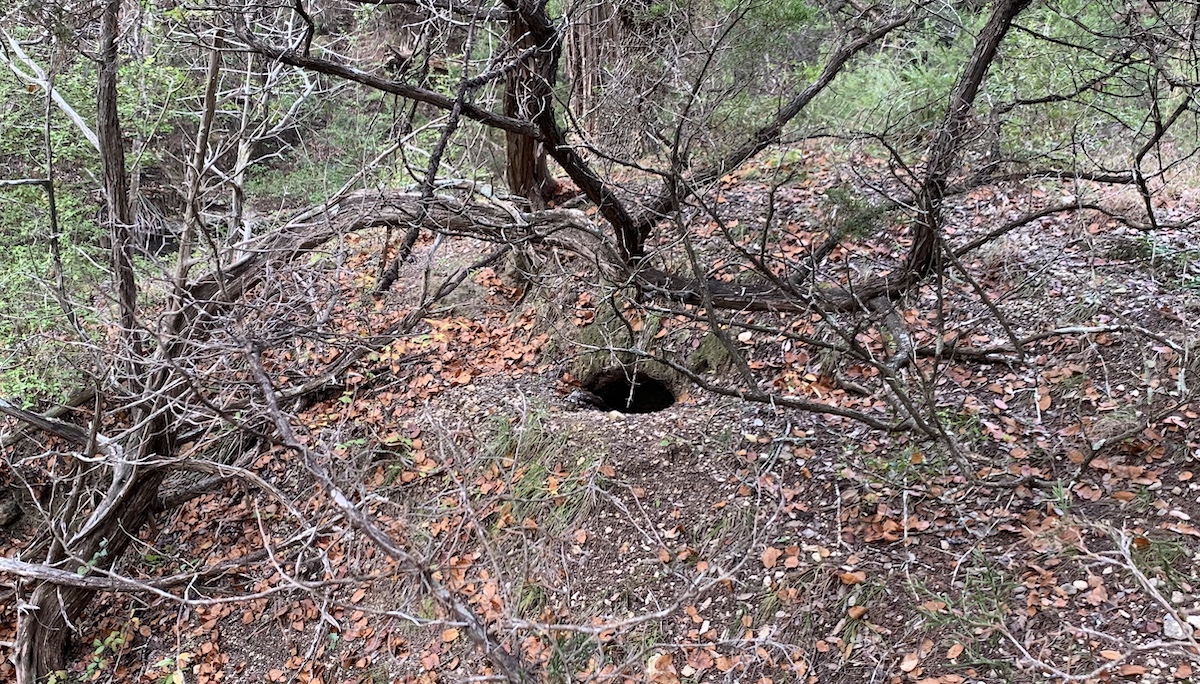 My mind has been turning to Foxy Brown of late. Often enough that I’ve taken notice, which is the point of consciousness, if you think about it. A being that can take note of something did so. Note was taken, and now I’m writing to you about it. That’s how these things work.

Specifically, I keep thinking about Foxy Brown’s den, which I found on one of my walks and greatly admire. You’ll find it at the end of the gulley that plunges into the Deep Valley behind Engelbrecht Inn. I haven’t visited the den since Foxy Brown left La Mancha, so I can’t speak to its current condition. But when I last saw it, the opening was a warm and inviting oval of packed earth brushed smooth by countless strokes of a fox tail. I remember gazing at her den from a distance and feeling within myself how comforting it would be to slip into a warm den like this, filled with siblings or mother fox, on a cold evening. The curving walls of the den’s opening made me think of the curve of Foxy Brown’s back and how I wish I could let my hand rest on that back to feel the muscles beneath her coarse fur. Then I would smell my hand and know within my self the scent of a fox.

That’s how I would describe my mind turning to Foxy Brown. A strange moment where I felt the desire of a fox for its den and a rising fantasy of touching this wild creature. Let’s call it what it is; a vision. When a thought or image is intrusive enough to demand your attention such that you have difficulty turning your mind from it, that is a vision.

As to WHY I’ve been receiving these visions, there are roughly two schools of thought. We could call one “scientific” and the other “mystical,” but I think the matter under consideration is important enough to warrant something more nuanced than labels.

We could say the two schools of thought are represented by these headlines:

I don’t know. Which headline do you prefer? The first one is a no nonsense version that makes no nonsense people happy. The second one is chock full of nonsense.

I guess you can think about this however you want. I spend a lot of time wandering around La Mancha watching animals. I liked the fox that used to live here. I hope another fox will arrive someday. And we all know that if you see one fox you’ll eventually see others. I’m okay with the no nonsense version I guess.

But here’s the thing. Way down inside me, down in this place I cannot describe or explain to you, I think I prefer the nonsense version, in this particular case. I spend a lot of time wandering around La Mancha watching animals. In particular, foxes, and I feel a fox-sized hole in our little world. And there is a new feeling smoldering behind Engelbrecht Inn, down where the Wild Gulley meets the Deep Valley. Something is calling to those of us who listen and take care to know the wild sounds of La Mancha. There is some movement, some presence, some new thing at the end of the gulley under the base of the tree and behind the tamped soil of Foxy Brown’s old den.

Someone is returning to us.